Minecraft has been a hugely popular game since the first release in 2009. The popularity of the game led to some incredibly talented people creating amazing things with it. Shaders are one such example, these are textures used by Minecraft that allow you to change what your world looks like and make it look more realistic than ever before

The “continuum shaders” is a resource pack that has been released by the developers of Minecraft, Mojang. It is one of the best shader packs to show off your world. 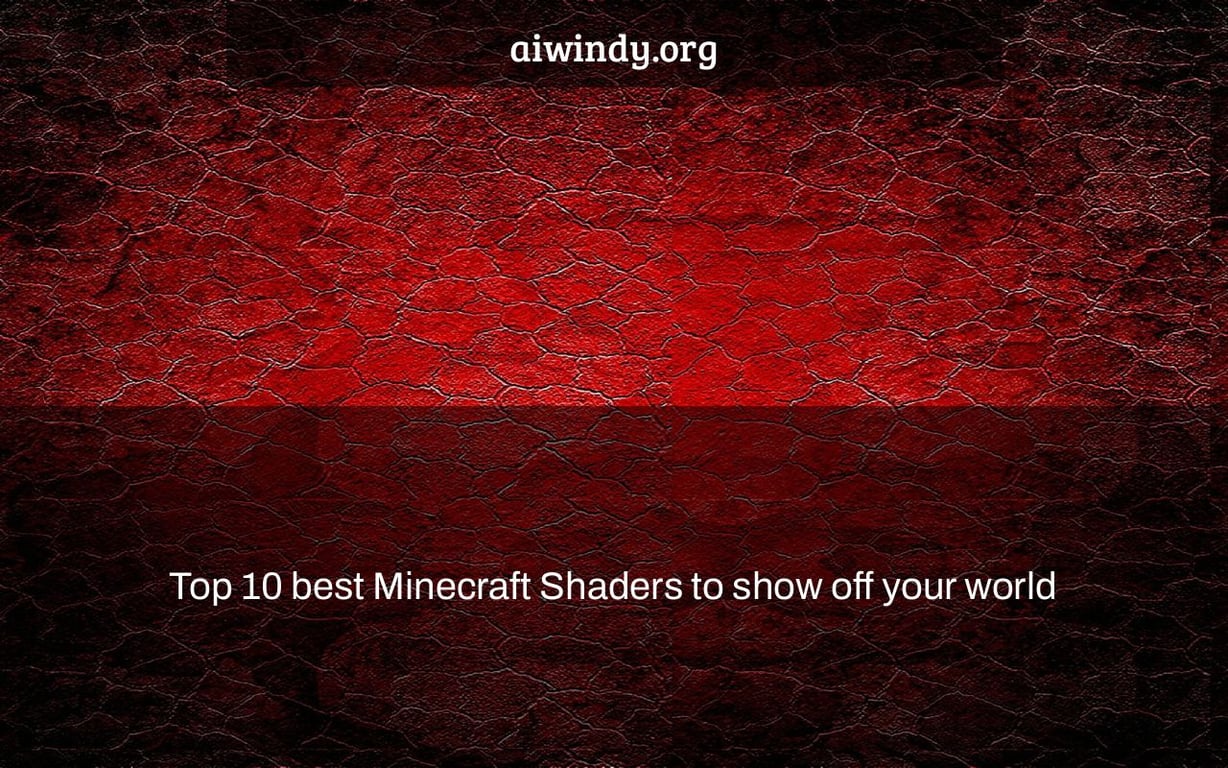 Have you ever desired for more life in your Minecraft environment when playing vanilla Minecraft? It’s quite reasonable to expect more from your game’s aesthetics, particularly when blocks stretch as far as the eye can see. As a result, independent developers have built a slew of Minecraft Shaders to spice up the game. These will enhance your world with lighting effects, environmental movement, textures, and a lot more contrast and realistic shadow images. Some shaders are even ray-traced, which is fantastic for systems with a lot of horsepower.

THE REST OF THE ARTICLE CAN BE FOUND BELOW.

How to Install Shaders in Minecraft

Before we get into our personal favorites, let’s go through how to install Minecraft Shaders. It’s a complicated procedure, so make sure you follow it step by step.

Optifine is the first item you’ll need. Visit their website, optifine.net, and go to the “Downloads” section. The various versions of Optifine that match to the version of Minecraft you are playing are listed on this page. Download the newest Optifine version 1.17.1, for example, if you’re playing Minecraft version 1.17.1.

All you have to do now is open Optifine once you’ve downloaded it. It will launch an installation window, and you must click “install” to proceed. It may ask you to install Java first, which you can do easily by downloading the most recent version from their website. It simply takes a few moments to complete the installation.

Try running Optifine in Minecraft before continuing. The Installations tab in your Minecraft Launcher will have a new version. “New Installation” should be selected. Choose the version with the word “Optifine” in the name from the dropdown menu. Return to the main menu and pick the installation you want to play, then click “Play.” You could see a warning that it’s a third-party plugin, but don’t panic; Optifine has long been a reliable Minecraft add-on.

You can simply install modifications now that your Optifine is up and running.

Open the Windows Explorer program. Type “% appdata% ” in the folder location field, hit enter, and it will take you to various game folders automatically. There will be a folder named “mods” within the “.minecraft” folder. There, upload your Optifine file.

Return to the “.minecraft” folder after you’ve downloaded your shaders. A new folder named “shaderpacks” has been created. Drag your shader.zip files into that folder, and you’ll be able to access them in the Minecraft game. When you enter the menu and choose “Video Settings,” you’ll discover it.

Let’s take a look at our best recommendations for Minecraft Shaders now that we’ve covered how to install Optifine, input Shaders, and access them. 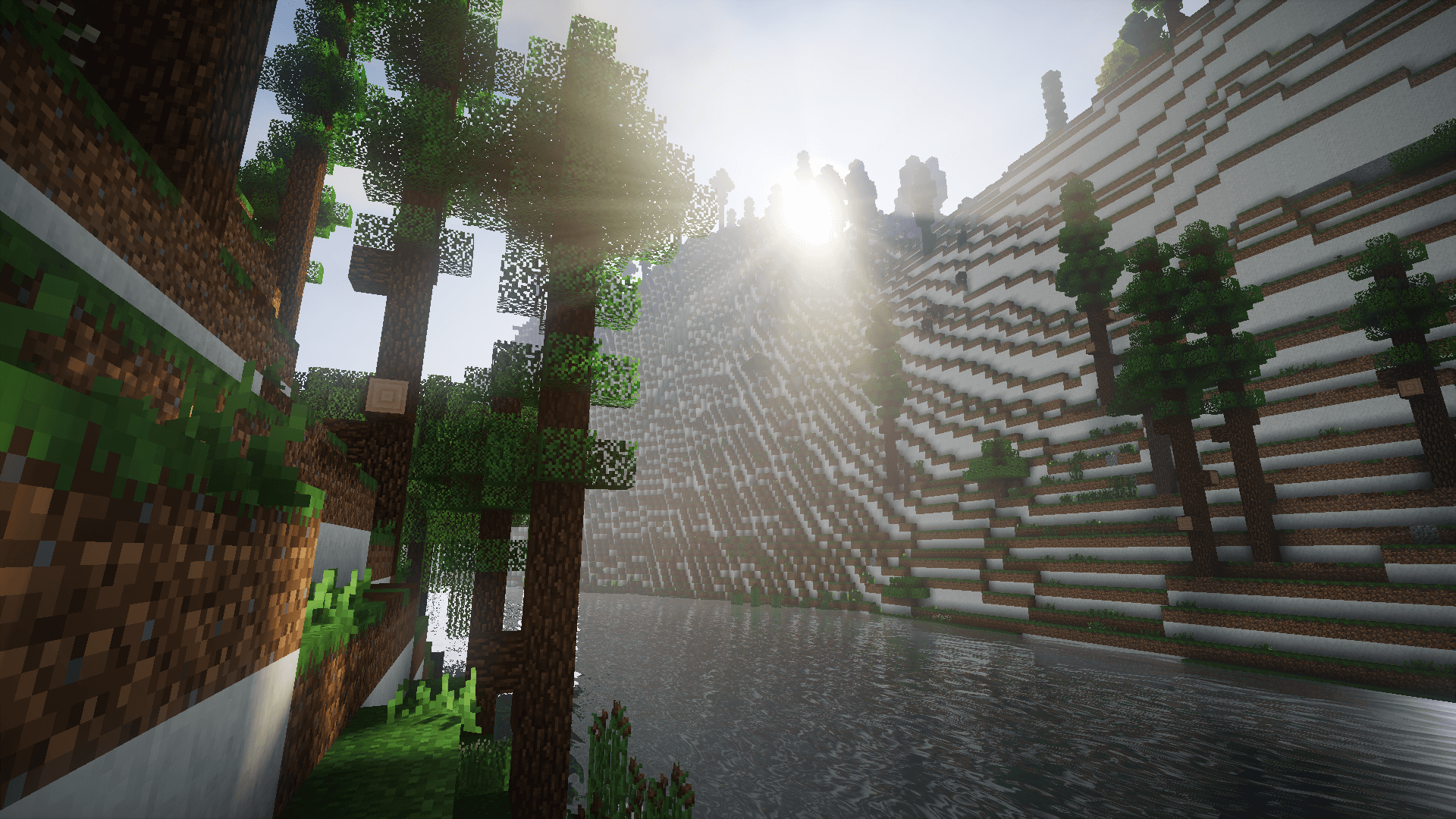 Chocapic’s style is deceptively basic, yet it’s executed well. The contrast and shade aren’t excessive. The colors aren’t too intense to be caricature-like. When it comes to snowy biomes, the tones are warm enough to seem summery, yet they look quite clean. Chocapic13 will make every angle and biome in your Minecraft environment appear beautiful. Its appearance will last for many years.

Chocapic’s many adjustments and versions are, nevertheless, a crucial component in its status as a top-tier shader. There are lighter models that do not need a powerful setup to operate. Then there are more severe variants that offer excellent results if you have the necessary equipment. Even the simplest version offers a plethora of possibilities to explore. You may change the quantity of fog, the amount of blue and red tones, the detail and brightness, and in some versions, you can even utilize Depth of Field.

Chocapic13 and all it has to offer will appeal to those who love highly customisable shaders. 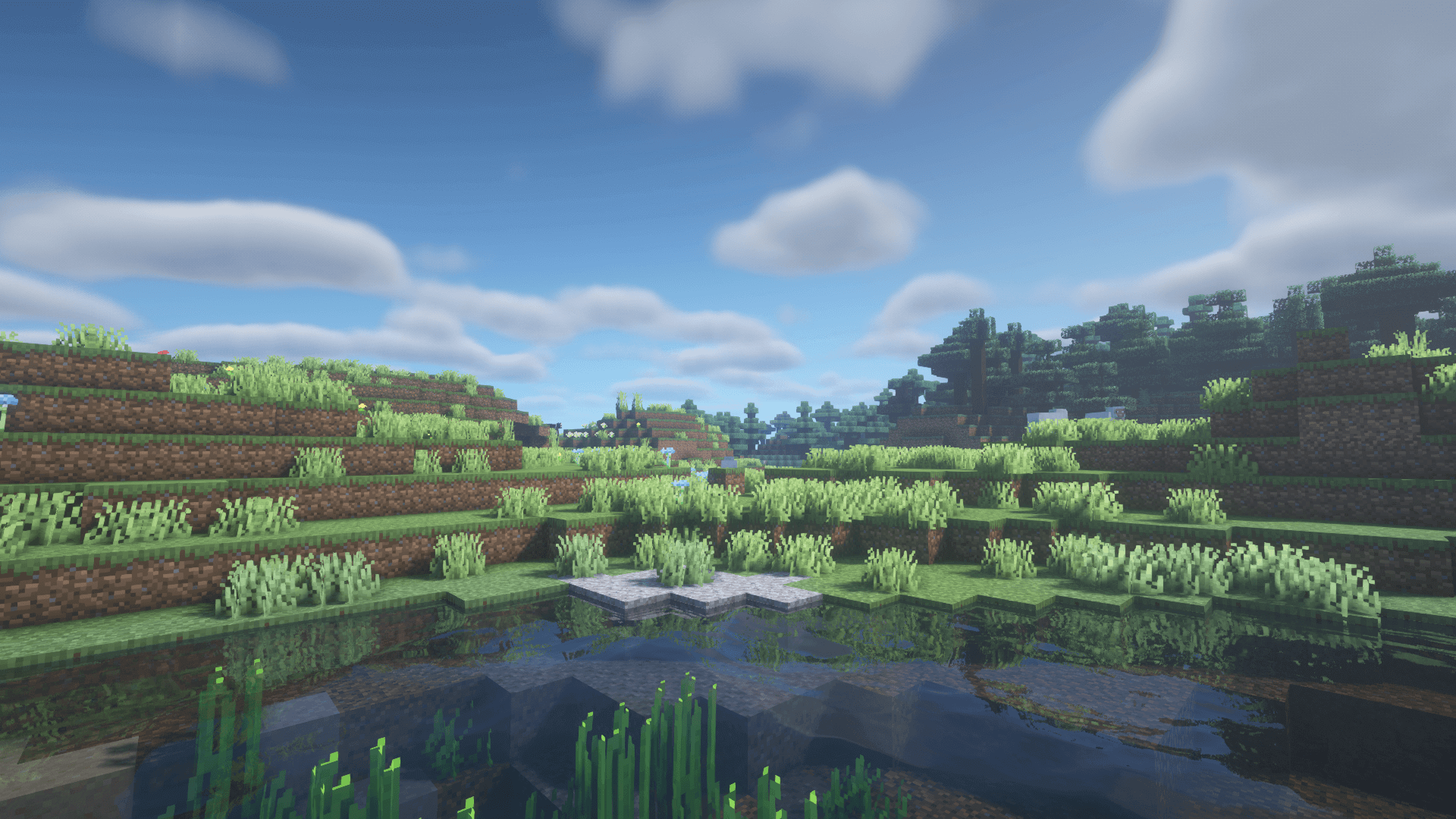 BSL Minecraft Shaders will give your environment a more hazy, dreamy appearance. In compared to Chocapic’s, the contrast and vibrance are a little more washed out. However, there are several atmospheres to choose from. With a hint of life-like sun glare, you get the impression of staring out into the horizon. The additional light and glow produced by light-emitting blocks exude a gentle appeal.

BSL is one of the lightest shaders, which we enjoy. To run them at reasonable quality, you don’t need a complicated setup. It’s a lovely shader with a lot of options for customizing it to your tastes. BSL will provide a fantastic ambience whether you’re broadcasting your Minecraft world or just snapping shots. 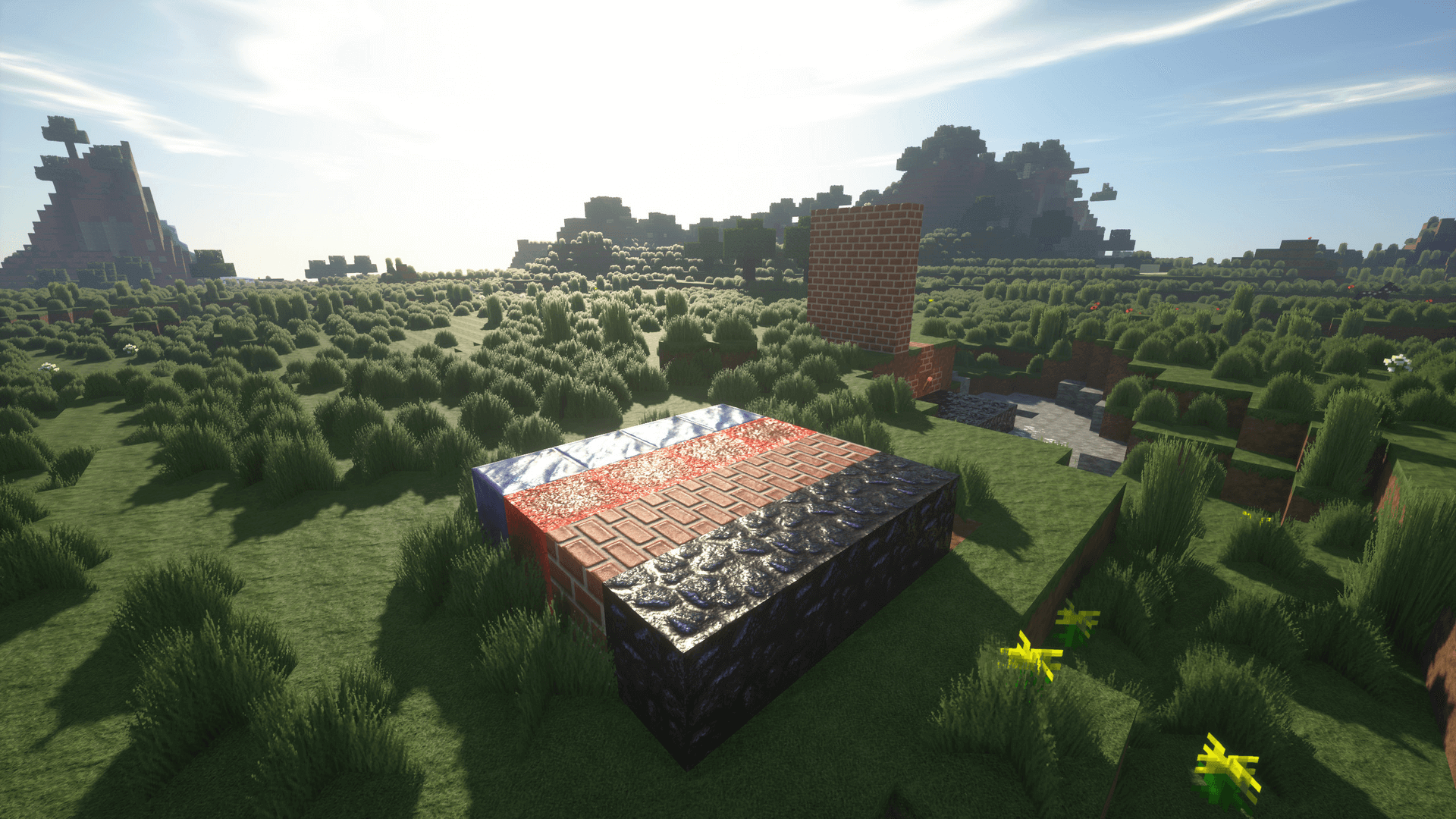 SEUS has a similar appearance to BSL, but with a little more contrast and shadow room. The water created with SEUS Minecraft Shaders is elegant without being garish. In addition, instead of the square or diamond sun that Minecraft comes with, you receive a real-life sun that hovers over your Minecraft world.

SEUS’s addition to Minecraft’s ambience is minor, but it adds a lot to the game. SEUS has also just released a hot new upgrade to their Shaders. One of their most recent releases includes a wet-surface-friendly pseudo-ray tracing technique. So, if you want a dark scene with a lot of detail, switch on the rain and your SEUS shaders. It may astound you. 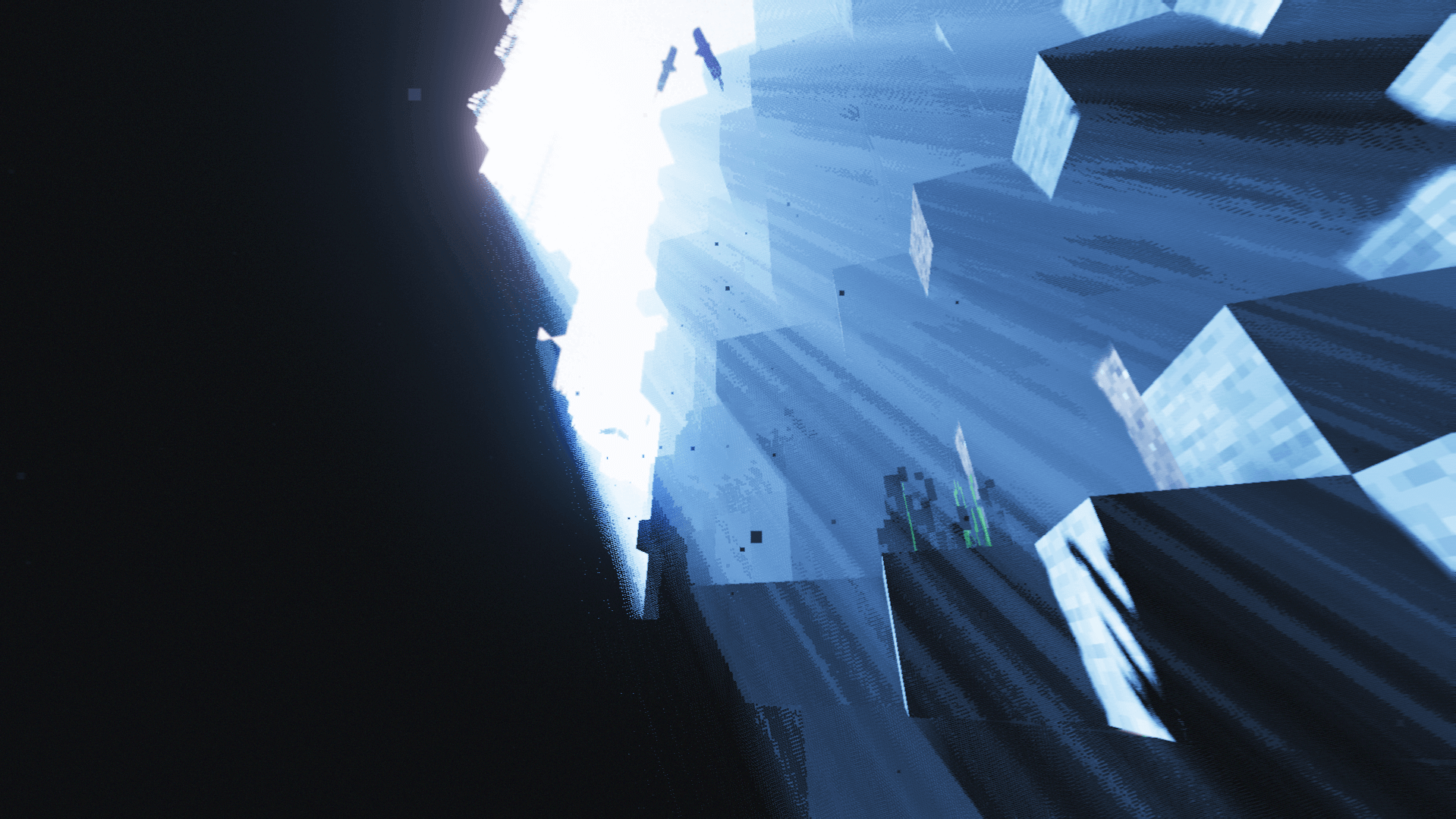 When it comes to sunsets and water effects, Kappa is one of the shaders to beat. Without harsh contrasts or washed-out hues, the sunset tones seem clean and peaceful. The water’s shimmers and reflections provide a tropical appearance that’s perfect for showcasing your ocean biomes and coastal Minecraft creations. Imagine going on a boat ride with this shader on. It’s a whole different experience.

Apart from the water effects, Kappa is one of the greatest Minecraft shaders for cloud and fog adjustment. You may adjust the amount of volumetric clouds and fog in your environment to make it more mysterious or fantasy-like. If you bring these shaders into the Nether, you may create a deep atmosphere. 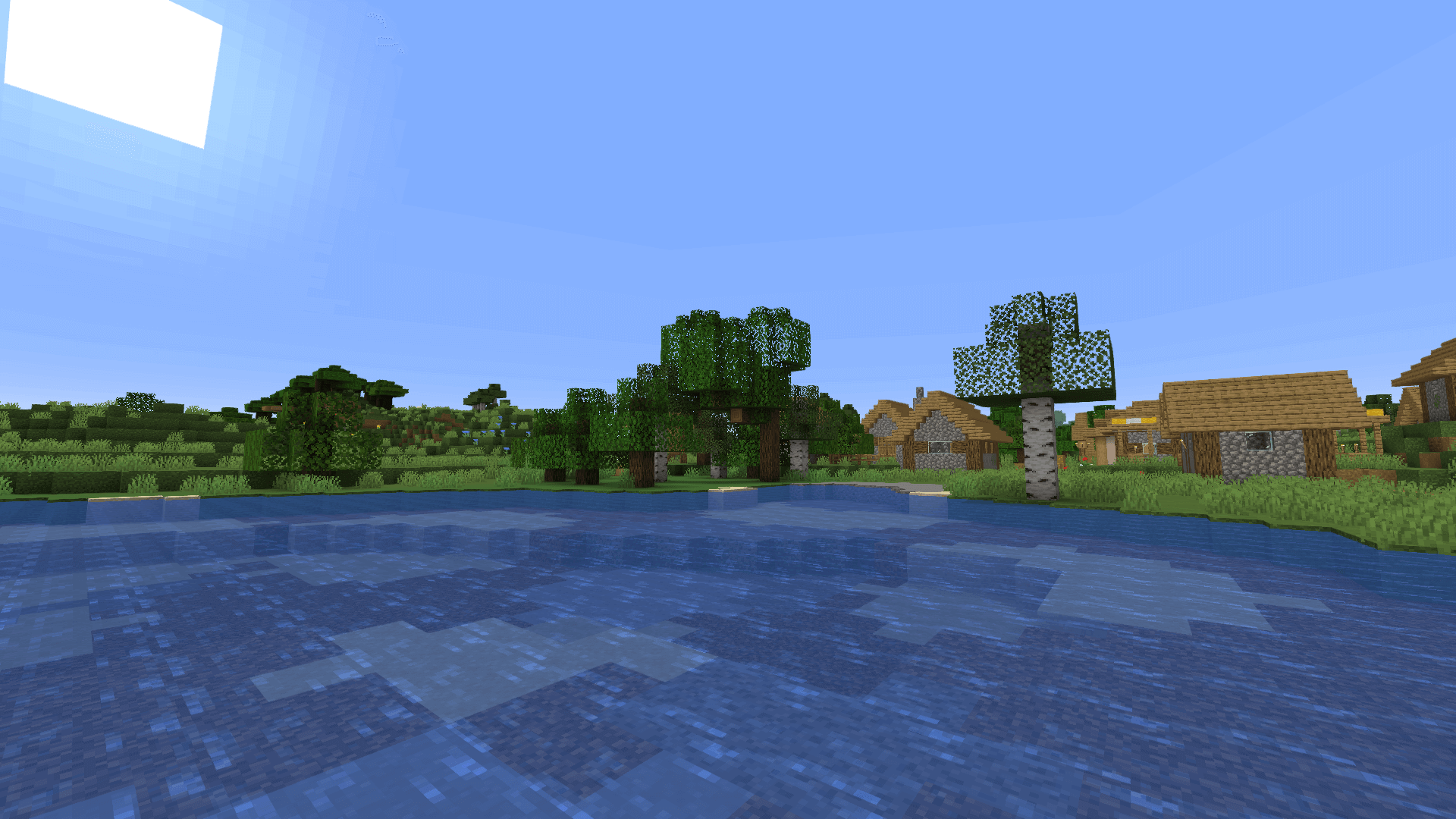 ProjectLUMA provides some refreshing vibrance and saturation after traveling through some hazy shaders. Its water effects will provide one of the most pleasant and deep blues available. We like how ProjectLUMA uses the whole color spectrum here, offering blues, oranges, and shades of purple depending on the illumination.

Using ProjectLUMA to display your Minecraft world will provide a new degree of realism, particularly if you’re displaying an aqua-heavy biome. You’ll get deep immersive lighting and tones for your game experience, whether it’s a swamp, turtle bay, or deep ocean. Just keep in mind that it isn’t a shader that is well-suited to light computers. To catch everything in excellent quality, a bigger rig is required. 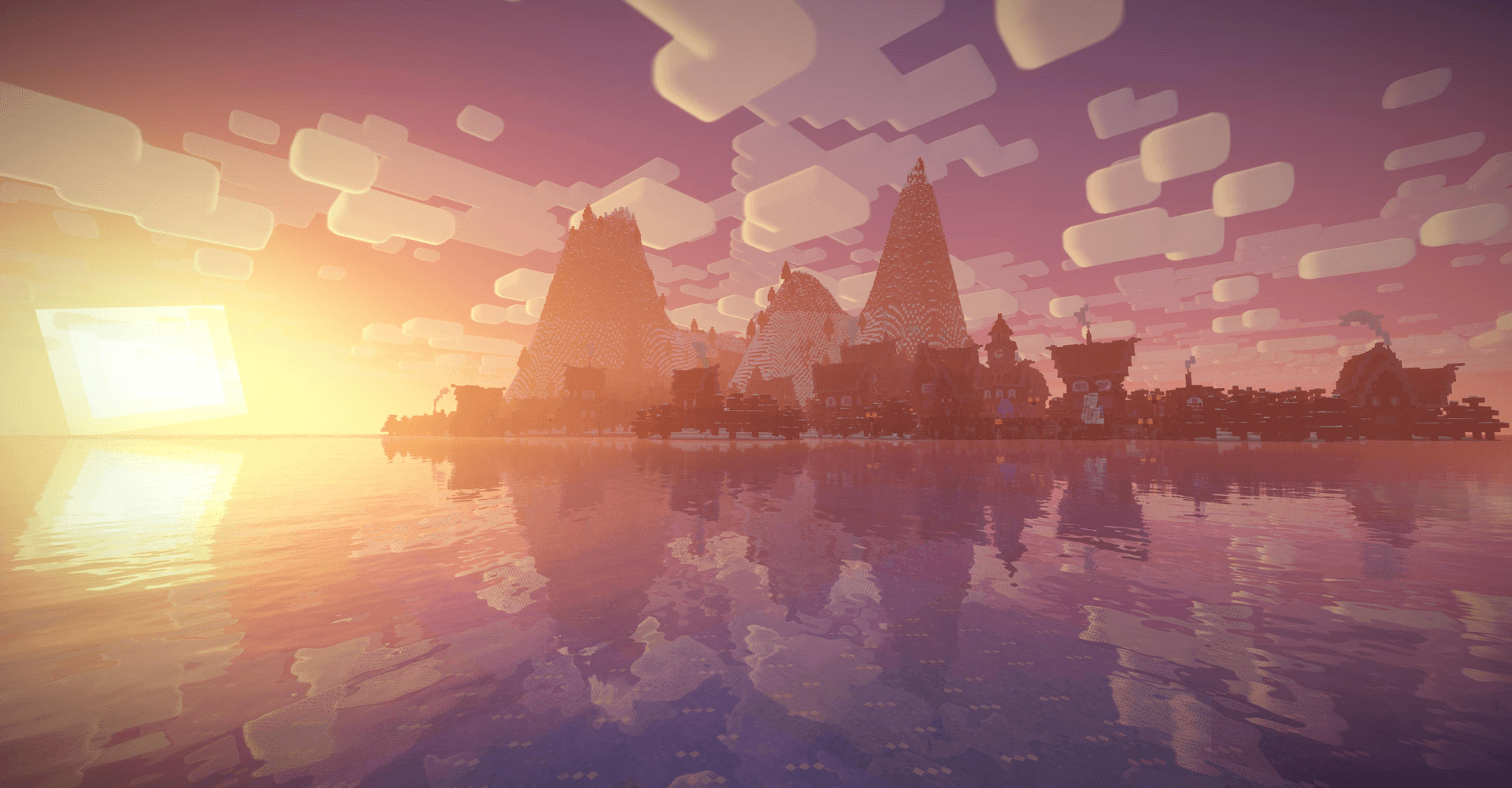 Nostalgia Minecraft Shaders is a nostalgic game that lives true to its name. These shaders transport you back to the early days of Minecraft, but with the addition of lighting, shadows, and water textures. There’s a lot of ambient light and fog that sometimes seem washed out, but it looks natural and recognizable in most biomes and light settings.

Despite their retro appearance, these shaders provide something fresh to the recently released Nether biomes in Minecraft, and will undoubtedly surprise us when the Cliffs and Caves update arrives. For older desktops or gaming laptops, it’s one of the finest shaders. It’s light enough when tuned properly, yet it delivers what vintage Minecraft Shader pack gamers desire. 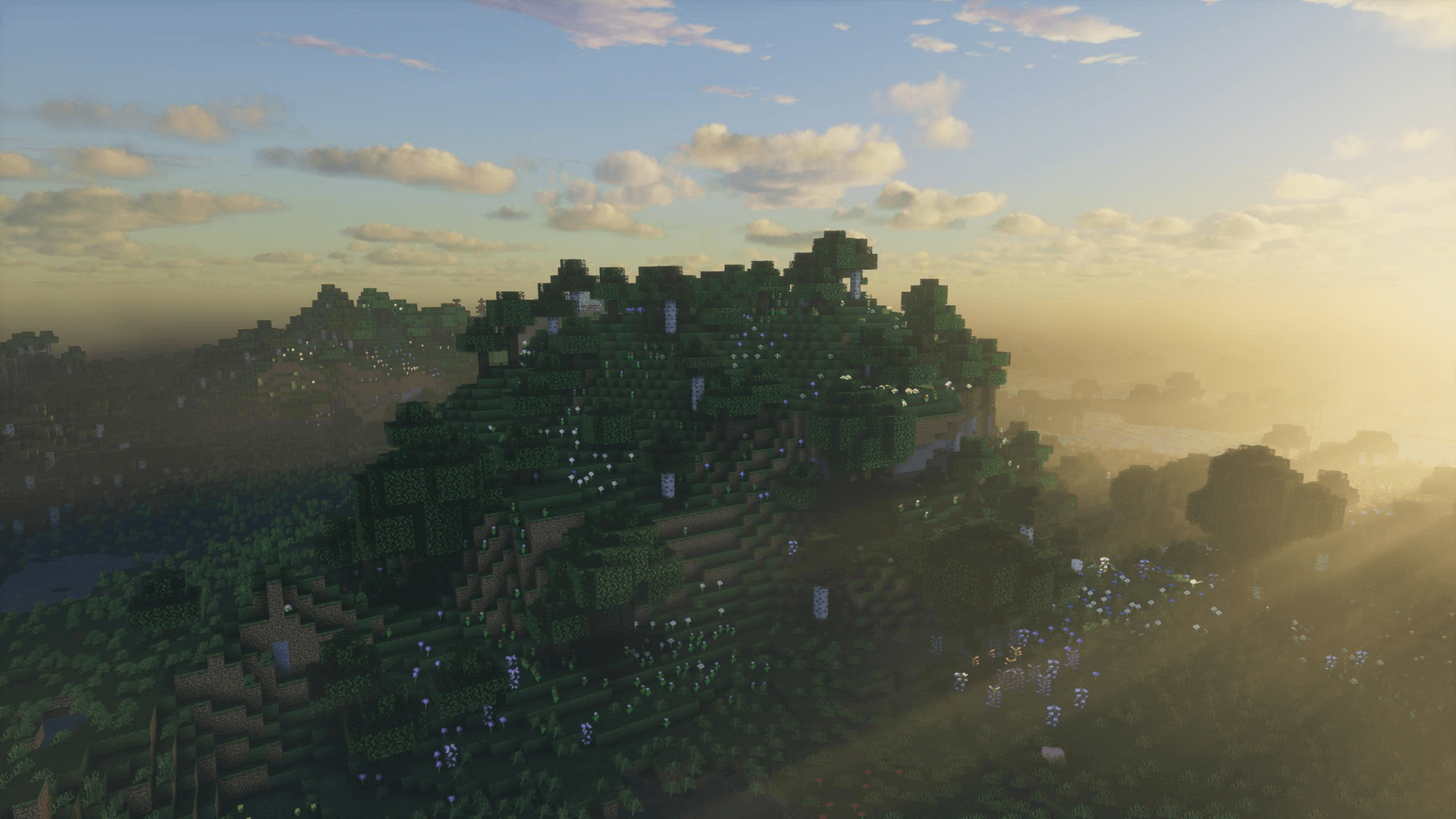 Ymir is one of those Minecraft Shaders that looks amazing in wide views with long render distances. Although it doesn’t produce a clear image for closeups and detail photos, the mood and atmosphere it creates transports you to another planet. Ymir’s blues and greens may make your Minecraft world appear like a movie, whether it’s over a forest or a mountain biome.

Another interesting thing to experiment with using Ymir is how the shaders seem in various weather conditions. With how it impacts the environment, it provides storms and snowstorms a genuine aspect. Ymir’s clouds are also puffy, which is a welcome contrast from the normal wispy clouds provided by most Minecraft Shaders. Ymir’s sky are perfect for landscape photography. Ymir is an excellent choice for showcasing a large Minecraft world in the best possible light. 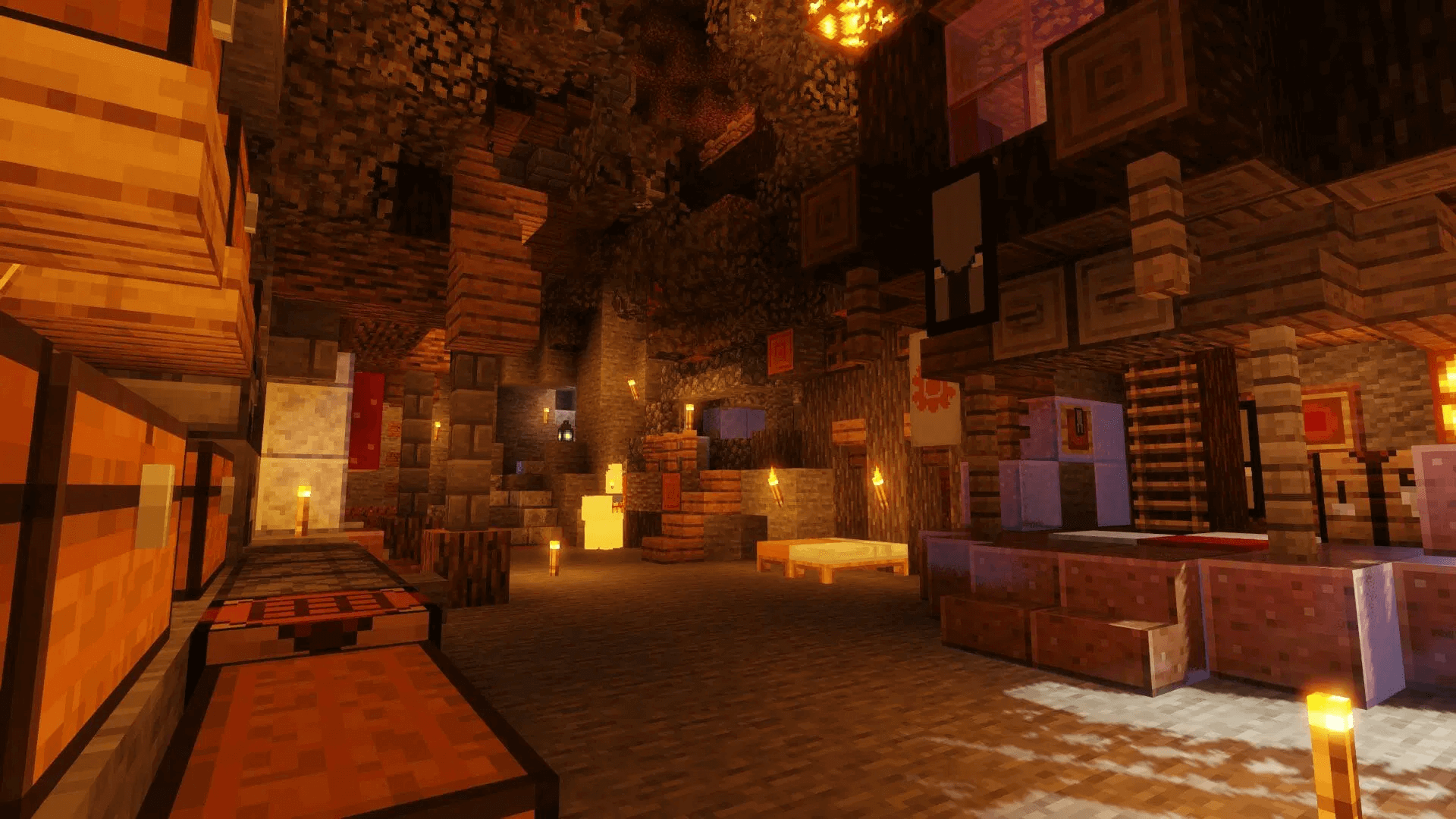 Voyager is a unique shader that has a more colourful appearance than Ymir. Despite its blue and gray tones, which make broad pictures appear dramatic and misty, we believe Voyager also looks well in warm torch-lit caverns. It pulls in the orange glows without being too contrasty or overbearing. We like how it adds a deep blue to water without being as bright as ProjectLUMA.

Voyager has pretty about everything. There is a fantastic variety of clouds and volumetric fog that can be adjusted, stunning water effects, decent light modifications, and a subtle overall tone that gives your Minecraft environment more life. These shaders, in our view, especially stand out for broad mountainous scenes with a lot of fog. It may put a strain on your render distance, but the ultimate result is well worth the effort. 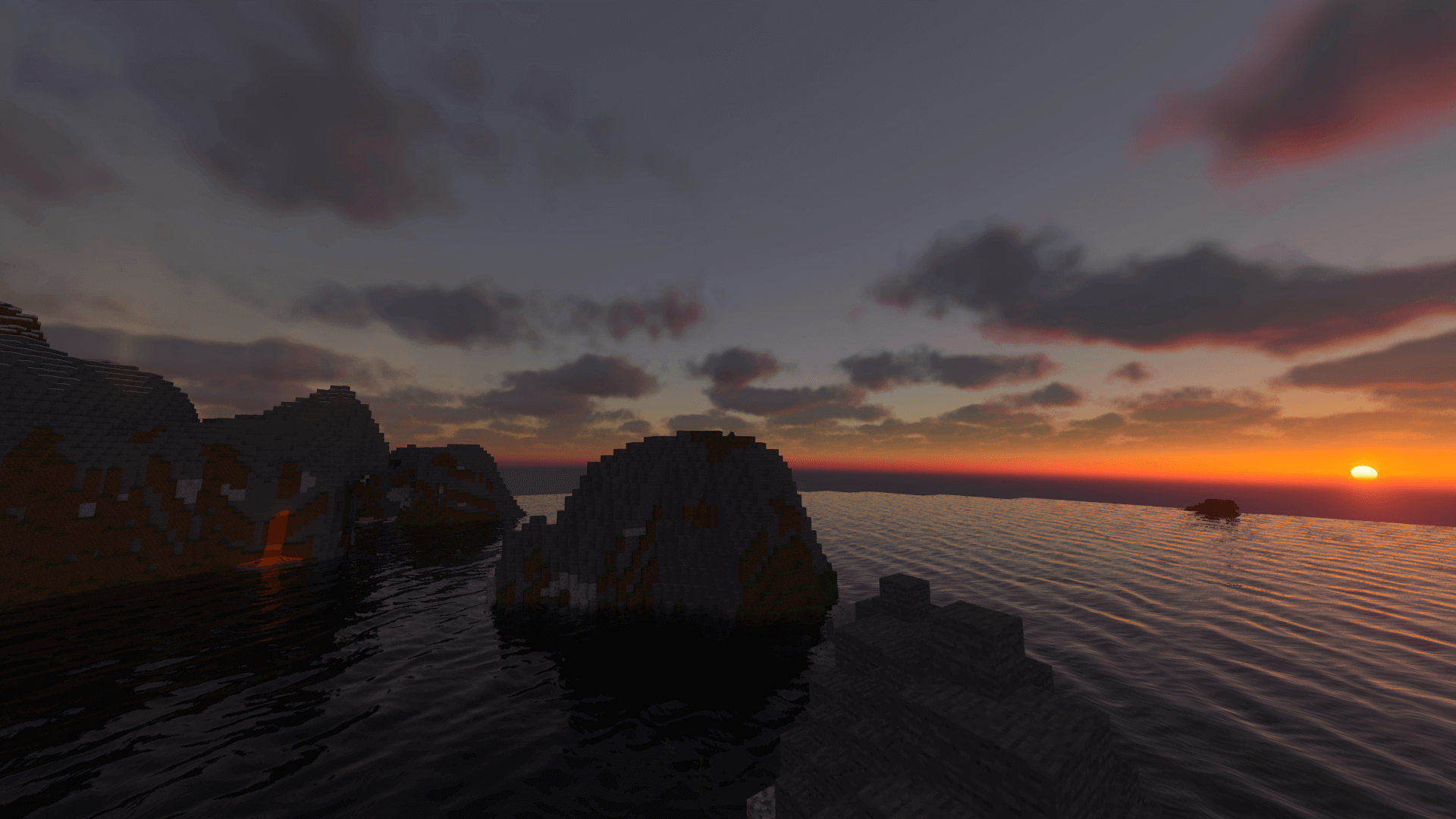 Continuum necessitates a high-performance setup, but it’s well worth it if you have one. Continuum Minecraft Shaders transforms your environment into something straight out of a movie. These shaders add nuance to the lighting effects, making them seem more realistic without being too dark.

The use of Continuum Shaders with those light shafts is one of our favorites. The volumetric fog included with the shader may be used to alter the number of light shafts. With the way everything interacts to the light and sky of the Shaders, you can truly sense the atmosphere’s thickness and opacity. The clouds drastically alter the atmosphere. Continuum, like Ymir, is perfect for wide images with long render distances. It creates a fantastic mood. 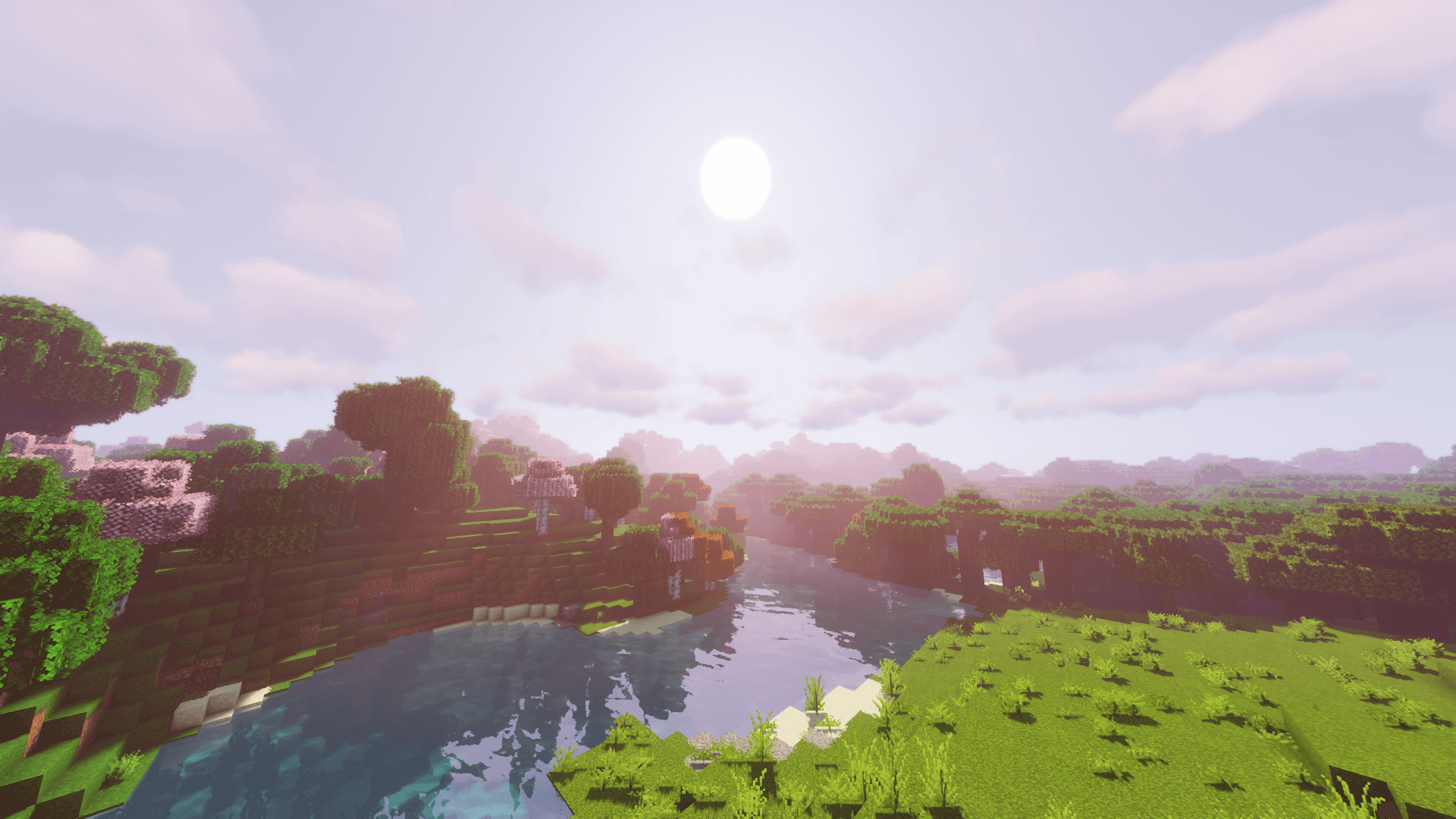 Last but not least, we have a low-performance Minecraft Shader that is still popular among Minecraft players today. Sildur’s really lives up to its name’s “Vibrant” component. With the correct sky and light flares and reflecting surfaces, you can practically catch the whole rainbow of hues in one frame. The shaders are basic, but they provide a really refreshing picture of places that might get monotonous after a few hours of action. It’s a lot of fun to experiment with lighting at Sildur’s.

Sildur’s, on the other hand, has a limitation in terms of customizability. Sildur’s shader, unlike our top shaders, has just a few choices for changing fog, clouds, and even color tones. Even if the settings are increased, gamers with just light gaming sets will be able to benefit from the light Sildur’s packs. Sildur’s is usually a safe bet for some vivid and fun tones to show off your Minecraft environment, particularly in terms of performance.

One of the most wonderful aspects about Minecraft Shaders is that there are no boundaries if you search hard enough. Because Minecraft has a sandbox, almost open-source feel to it, several independent developers have worked hard to create shaders for various cinematic and photographic effects.

The majority of our suggestions have a realistic, movie-like feel that contrasts nicely with Vanilla Minecraft’s general blocky nature. However, if you’re looking for a weird, cartoonish shader, there’s one for you. Ray-traced shaders have also been the talk for a while, so why wait if your rig can handle it? We strongly advise you to try out any shader that catches your eye.

Check out how to create a great Minecraft House, the finest Minecraft Castle designs, and the most spectacular Minecraft Seeds for interesting survival games for more Minecraft topics.

The “bsl shaders” are a set of 10 different shader packs that can be used to enhance the look of your world in Minecraft. The pack includes many different textures and effects.